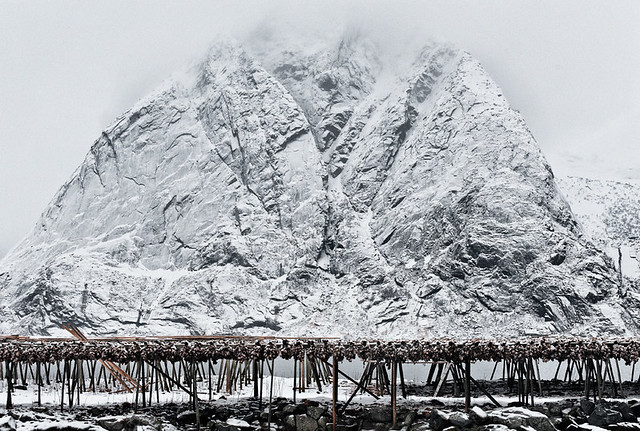 I’m loath to be too gushing (just on general principle!) but Lofoten is unequivocally a fabulous place to visit in winter, both from a photographic and from a purely sight-seeing point of view. I’ve just returned from my first trip there and I think it highly likely that I’ll return one day, perhaps in summer, but more probably in winter again.

I feel I should start off by ‘confessing’ that, until about a year ago, I’d not knowingly heard of Lofoten! I’d travelled in Norway before, pretty much the length of it, but that was a long time ago and we drove around ‘seeing what happened’… What happened was that we missed one of the best bits – perhaps the best bit! Now, everyone I mention Lofoten to seems to have either heard of it or actually been there, so it’s rather less obscure than I’d imagined.

Where and what it is

For that tiny minority of people reading this who aren’t intimately acquainted with the location and topography of this string of islands: they’re towards the north of Norway, inside the Arctic Circle, and tenuously connected to the mainland by a series of bridges and undersea tunnels.

For context, I flew into Leknes, which is a little over an hour by road, or approximately 70Km, from the southern tip of the islands at Å (pronounced something like ‘awe’, and, appropriately, the last letter of the Norwegian alphabet). This area is essentially the southern half of the string of islands called, collectively, Lofoten. This isn’t intended as a place name list, and there are many sites which describe what’s where and how it’s strung together, so I’ll stop there! (For anyone feeling pedantic when reading this, the little archipelago of Røst is really the end, but there’s a lot of water between it and the ‘main’ Lofoten archipelago, so I’m choosing to see Å as ‘the end’ ;-) )

In appearance, the best analogy I’ve come up with for Lofoten is that of a somewhat broken up series of giant Toblerone bars, with the tops of the triangles protruding from the Norwegian Sea and their sides plummeting straight down into it. There is not an awful lot of flat land in Lofoten; just triangular mountains and water. I’ll concede that the Toblerone analogy suggests a regularity which is fortunately not evident, but it does nicely indicate the angle and overall, pointy ‘nothing here but mountains’ nature of the place!

Mountains in most places rise gradually; these don’t. Many of them look as if a monolithic troll with a meat cleaver and a penchant for triangles has taken a perfectly normal mountain and fashioned something sharp and tooth-like from it with a couple of slanting blows. I’ve seen a great many mountains, and these are, especially collectively, radically different from most. Not that they’re very high – something in the region of 400-800m., but that does look big when seen from sea level and when they tend to be much closer to vertical than to horizontal!

Conveniently, where the land does approach the horizontal – and there are some areas between the peaks where this happens – the inhabitants have laced the edges of the fjords with roads which lead to numerous sandy beaches and rocky shelves. And therein lies both a huge plus point to the islands and a slight downside, depending on your point of view.

So, from my perspective:

That second point is a quibble, however; just something to be aware of when setting expectations for yourself before travelling there. Personally, I rather like just turning up in places and learning about them as I find them, rather than doing lots of research beyond the more or less essential ‘how to get there and how to get around’ sort. And the big benefit of the buildings is that, with very few exceptions, they’re pretty and can be used constructively in images. 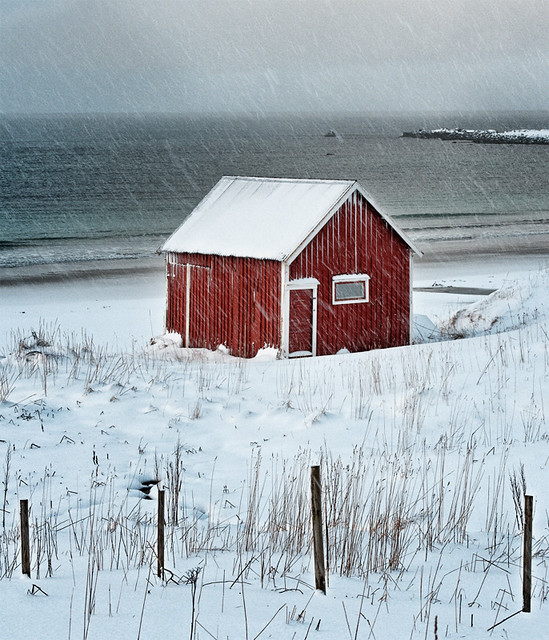 Each village / town / collection of houses decrees the one or more colours in which its buildings can be painted. We’re not just talking ‘red’ or ‘orange’ here – they prescribe a specific red and/or a specific orange, or whatever other colour(s) the settlement has chosen for itself. This means that each inhabited area has its own character imprinted by the single or multiple colours of its buildings. The result can be remarkably picturesque. I have no idea what the penalties for non-compliance are, but from the evidence I saw, people most certainly do comply. Reine, where I was based, has a mixture of a rather dramatic, strong red, a deep orange, and cream; in its winter garb of snow it looks thoroughly delightful and offers huge potential for dramatic, contextual, or simply pretty images.

On the importance of snow

Snow is far from guaranteed in Lofoten, yet it is, I think, a very important aspect of visiting in winter. I’m not being facetious here: yes, it’s the Arctic, but snow is not omnipresent on the islands during the winter months since the Gulf Stream keeps things warmer than the inland, classically Arctic areas to the east. It’s rather similar to the way that the Black Cuillin of Skye are rarely in what mountaineers call ‘winter condition’.

As it was described to me, the snow can be around for a week or so, then disappear, only to be replaced a few days later. The day before I arrived, there was apparently no snow at all, whereas every day I was there brought fresh snow. In fact, it was more like every night, which was rather convenient for freshening things up :-)

Photographically, I believe the snow is very important, probably more so than in many places. The reason for that is the nature of the mountains. They’re very old, hard, dark rock; that’s how they survive this hostile environment and remain jagged and angular. With snow on them, the major features are picked out superbly as their steepness provides snow-free areas to contrast with the white. Many of my images show the mountains looking more like finely drawn pencil sketches than ‘normal’ mountains – an effect I very much like and one which absolutely depends on the crystalline covering.

Without the snow cover, my conviction is that the darkness of the rock would make dragging detail of shape and texture from the faces more than a little difficult. I’ve spoken to a few people about this, as well as looked at summer images, and it’s a conviction with some credibility I feel!

From bonsai landscapes to big vistas

The effect of this on my photography was that I was always drawn to the ‘big vista’ images showing these amazing, sketch-like mountains: I have relatively few detail shots. Yes, I did attempt some ‘fence in snow’ images and some ‘snow-covered tree’ images, but all that achieved was even more respect for people, like Michael Kenna, who can construct brilliant images from such stark simplicity! My feeling is that summer would be a better time – at least for me – to make ‘intimate landscape’ images. More than that, I suspect that the black, relatively featureless nature of the mountains would make this compositional choice almost inevitable.

Perhaps a week of primarily vistas is no bad thing, though after my very enjoyable focus on relative, sometimes scale-free, detail in the US deserts – my ‘bonsai landscapes’ trip! – I’m almost distressed at the number of shots I captured in Lofoten with both sky and several miles of landscape from corner to corner! That’s in part since I wasn’t inspired to photograph the buildings very much.

There’s a pre-visualisation lesson there I think: since I hadn’t pre-visualised images with buildings, I wasn’t drawn to them initially. In fact, as I said above, the colourful buildings against the snow, particularly the deep red ones, make very striking images indeed and those few I do have, I’m very pleased with.

OK – I confess to being very, very impressed with Lofoten…

In summary then, having intended not to write an entirely gushing article, and having read through it now, I acknowledge that I really was hugely enthused by Lofoten! Those minor issues I did have (human presence essentially – the lack of wilderness) can be seen as positive and as opportunities for different types of image; they can also be largely avoided by taking advantage of the surprisingly good infrastructure, visiting the more remote beaches, and examining what’s in the distance carefully!

Oh! I should not omit mentioning what I’m told is a considerable additional, albeit non-photography, benefit of visiting in winter.

Fortunately, in winter, despite there being tens of thousands of drying fish everywhere – probably hundreds of thousands; a lot, anyway! – the aroma is only apparent close up, as a result of the cold. I imagine this is not true in summer: the fish bodies are taken down in June, but the heads take longer to dry; so winter gets yet another positive tick from me ;-)

By the way, the gallery images below seem to be much better than the embedded versions – I allowed WordPress to size and resample these. And if anyone has any detailed questions about where things are, etc. please do feel free to ask – I’m more than happy to help whilst I can still remember!

25 Responses to “Locations for photography: the Lofoten Islands, Norway”