“Obfuscation (or beclouding) is the hiding of intended meaning in communication, making communication confusing, wilfully ambiguous, and harder to interpret.” (Wikipedia)

In this article, communicating is the creation and display of a photograph, so the following is about ‘beclouding’ (rather a fine and appropriate word in the context of photography!) the scale of the contents of a photograph – something I’m increasingly fond of doing deliberately. My suggestion is that it’s often, but not invariably, a distinctly positive and useful thing to do, for a number of reasons which I’ll discuss.

I should make it clear that I’m considering this technique in the context of landscape photography. That’s not to say that it doesn’t apply in other genres, but I’ll constrain this short discussion to landscapes since that’s what I know something about!

I’ll also state up-front that I see this as yet another tool to assist with making images, not something which should be done without thinking, and certainly not a rule or guideline of any kind. Obscuring scale, or creating an image whose scale is actively misleading, has a purpose and result which may sometimes be appropriate but certainly shouldn’t be employed in every shot.

My argument is, in essence, that by creating images where the scale is either ambiguous or difficult to determine without close scrutiny, the viewer is encouraged to look more closely. More importantly, they’re encouraged to look for longer. In short, an image in which the scale is obfuscated may engage the attention of the viewer more deeply than one whose basic structure and content is immediately apparent.

I know plenty of people who, when looking at images – and this is particularly true of photographs, as distinct from, say, paintings – will pause long enough to recognise that “this is an image of X” before moving on to the next. The very same people, presented with something whose content is not immediately apparent, will often study it for longer. To be brutal, it’s easy to glance at an image which is overtly representative, see it as ‘a photo of thing X’, and move on, unless ‘thing X’ is itself intrinsically interesting to the viewer. Conversely, if the overall form, colour and texture of the object is appealing, but it’s subject is not, it’s much more difficult to quickly absorb the message ‘picture of thing X’ and move on: obfuscation may oblige the viewer to stop and consider.

That longer examination is intrinsically a good thing from the perspective of the photographer, but it should also be good from the viewer’s perspective, assuming that what’s there is worth studying of course! It seems to me that I ‘gain’ more from all forms of art if I know and understand them better. That’s true whether the art in question is literature, music, sculpture, or visual images. It follows from this that studying a photograph for longer should give me, as the viewer, a better experience, more connection with the art and the artist, and all those other ‘art appreciation’ stalwarts. If I can encourage that, as the photographer, it’s surely of benefit to all concerned?

Why does this scale-abstraction help?

When I approach a photograph, if the scale of the subject matter is immediately obvious then I know I tend to look at the subject before I see the art in the image. If I can immediately identify the subject then my inclination is to consider the overall image based on my previous knowledge, not to see the image as a construction in its own right; I find it difficult to do otherwise and I’m presuming that the same is true for most viewers. My thought process is more “is this a good photograph of thing X” rather than “is this an appealing piece of art”. There’s nothing wrong with the former question, but it tends to preclude, or at least diminish the likelihood of, considering the second question. If scale-obfuscation can reverse the order of those questions then my feeling is that most people will look longer and appreciate the piece more.

Beyond that, I know that I find it entertaining to puzzle over what I’m looking at, including what its scale is. It’s an additional element in enjoying the image and for me that’s a good thing.

When is obfuscation not beneficial?

It goes almost without saying – but I’ll say it just to make sure – that if the photographer’s intention is to represent a place accurately then it’s probably not overly helpful to obscure the scale! Indeed, making sure that there is something to which the viewer can relate is explicitly desirable and part of why people sometimes use human figures in grand vistas.

This is also true when the objective of the photograph is to induce a feeling of awe or wonder at the subject matter, perhaps due to its sheer immensity. Making sure that the scale is unambiguous must be fairly important in such images. More than that, some viewers will be actively diverted from the main point, the ‘awe’, if the scale is not made clear. They may even be annoyed if they can’t discern the scale easily; probably not the typical desire of the photographer!

‘Talon’: 1 metre at the front, 2 miles at the back. Scale highly relevant but deliberately obscure.

Context is, as usual, everything

Whilst individual images may benefit from lack of scale, it’s generally also useful to establish an overall context for a set of images. The viewer may be able to build up an idea of a place through a series of intimate landscape shots, but they will mostly also appreciate a few images to set the scene. Again, it depends on the artist’s intent: is the image, or set of images within a project, about the place, or are they simply using the place as a source of raw material for abstraction, as a means of producing an emotional response in the viewer, but with no intention of portraying the reality of the places photographed?

My feeling is that I, when viewing images in sets, like some context most of the time, yet I also like abstraction… It’s all about achieving a balance between, at one extreme, showing things clearly and, moving towards the other end of the spectrum, obscuring them for the sake of adding interest, intrigue and deeper engagement from the audience.

Returning to the whole ‘art’ issue

As much-discussed in photographic circles, photographs are often not primarily – and this applies particularly in the UK – seen as art by many people; not in the way that paintings are. People mistake photographs for reality (not all people – some people!) and see them as mere representations of something attractive, not artistic creations in their own right. As also much-discussed, they’re not reality and never can be, for many, many reasons to do with how our visual systems work and the rather obvious fact of their two-dimensionality. Removing or obscuring scale may remove the image from reality sufficiently for the viewer not to see it as ‘just a photograph’ but to approach it as ‘art’.

I’m emphatically not about to suggest that obscuring scale makes a photograph more artistic than one whose scale is apparent, but I will assert that it can make some people initially perceive the image as having more merit, and therefore encourage them to engage with it more strongly. I’m just as guilty as anyone else of seeing ‘picture of thing X’ and moving on; hence I actively like obfuscation in other photographers’ work: it obliges me to look again or to look more closely!

There are no absolutes in this. All I’m suggesting here is that it may be worthwhile to consider whether consciously abstracting an image from reality by concealing its scale from immediate recognition is worthwhile; whether it might engage the audience’s interest more? Further, looking more widely: is it worth introducing scale-obscured images amongst more obvious compositions to add variety to a project or set of photographs?

Personally, I think the answer is an unequivocal ‘yes’ to both those questions and I plan on continuing to do this.

There are many aspects to this approach and I’ve deliberately not attempted to cover everything I could think of around the whole scale issue, but any comments or arguments you have will be very welcome, either way! I should also point out that I very much like both completely abstract paintings and puzzles, so maybe I’m somewhat biased here…

14 Responses to “Musings on: obfuscating scale in photographs” 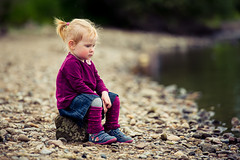 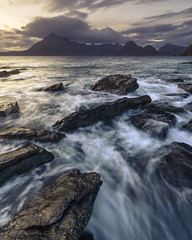 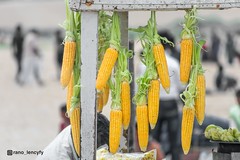